I've often banged my head on the desk as for the 5th time in a row a task sequence has failed when I've got back to check on it without really letting me know why.

I surfed straight into this little beauty of a post the other day so I thought I'd stick it up on here for reference.

Thanks to Steve Rachui for taking the time to blog this on his site:
http://blogs.msdn.com/steverac/archive/2008/07/15/capturing-logs-during-failed-task-sequence-execution.aspx
Posted by Steve Beaumont at 20:35 No comments:

I find these right click addons invaluable and also an easy staring point if you want to add your own by dissecting the XML it creates for them.
http://myitforum.com/cs2/blogs/rhouchins/archive/2008/04/09/sccm-right-click-tools.aspx

Computers not seen in 60 Days

I found this post by Matthew Hudson over on his blog but it didn't seem to like the SMS_R_System.ResourceType bit of the SQL so I'm posting the SQL snippet I use.

It's a handy little bit to have for identifying those potential AWOL systems.

Got talking to Rob the other day about SCOM & SCCM integration and I must say that I am fairly disappointed that Microsoft didn't put more effort into making these two products work more closely together.

In saying that, I put the idea to Rob to create a SCOM task that would spawn a browser and bring up the SCCM client details web report of the selected item in SCOM.

After a slight issue with spaces it's now in and working really well.

You can find it on Rob's blog post here.
Posted by Steve Beaumont at 15:43 No comments:

Since we have a revenue stream based on the number of assets out there I set about thinking how we could utilise SCCM to collect data to make the charging/asset logging process more efficient and accurate.

Since our charging is split amongst the different directorates and departments I couldn't just do a count of numbers or I wouldn't be blogging it here ;)

We needed a way to assign a device to a directorate/department and report against that detail.

After popping upstairs to see our resident developers for 5 minutes I returned to my desk with a nice shiny .Net application that needed pushing out to the masses ASAP.

What the dev guy came up with (Thanks Paul!) was a rather nice .Net app that simply popped up on screen and gave the end user two controlled selection lists based off our structure for Directorate and Department with a free form text field for them to populate the section as these tend to differ wildly.

Once this information had been gathered the app simply dumped it out into a registry key... somewhere I knew SCCM could scavenge it from :)

And then a configuration.mof edit:

This now allows us to run a modified Summary of Computers report with these additional fields added so that we can report to finance the exact number of devices per directorate and sit back while watching the money roll in!
Posted by Steve Beaumont at 15:20 No comments:

I got into a situation a while back where our primary site became corrupted and we didn't have a backup for some reason.

We tried uninstalling the site and re-installing and while it fixed the primary site problems it badly messed up the syncing with the central site.

In the end we followed the process below:

This thankfully brought our sites back to life.

Posted by Steve Beaumont at 14:40 No comments:

Before I type anything more I must warn you that the following article is against Microsoft's published best practices as it breaches administrative boundaries which should end with a within a forest.

We had a case here where we wanted to deliver managed public Internet in various locations (both existing corporate buildings and new purpose built locations).

When designing the solution it was decided to create an entirely new domain to help keep things separate and secure from the corporate side of the business.

The problem came about when I came along and decided that ICT needed to have the same amount of remote administration benefits over it as SCCM had given us on the corporate side.

I'm sure that it would have been much simpler had we been in native mode, but since we aren't I had to tackle it from a Mixed Mode perspective.

First step was to install a new Primary site within the domain/forest that needed managing which is the same as installing SCCM for the first time and the DB was split off to a separate shared SQL box again.

Once the new site is installed and running I needed to give both sites some way to trust each other as each forests AD schema has been extended but because their is no trust they don't know about each others presence or have a security trust.

For this I used the Preinst command to export the site keys.

Once that was done accounts were created on both domains/forests for the sender accounts that are required and then addresses created and pointed at each site.

Final thing to do was on the Public forest SCCM server through the console and expand Site Management. Right click on the site and choose properties. Click set parent site, choose the Central Corporate site... and you're done!

What does SCOM think when you remove a drive?

We ran out of space on one of our old (And I do stress the old part) data servers the other day so we took the chance to add a LUN on the SAN and migrate the data across. To make things simple for us we just stopped the server service and juggled the old and new drive letters around and then removed the old partition.

SCOM didn't seem to like this however as the open alert then demonstrated:

I've always been one of them people that go out of their way to spend time to find tools that help automate documentation as it's the least glamorous part of implementing systems.

One of the best tools I've found for helping document SCCM deployments is a tool by Jeff Tondt.

It allows for easy visio documentation of sites like this: 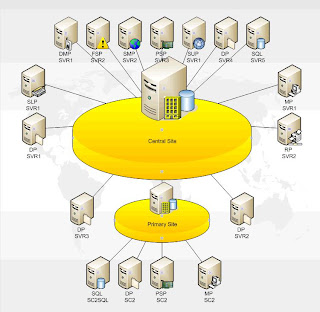 You can find the application here: http://www.tondtware.com

Many thanks to Jeff Tondt for giving me permission to post his site link in my blog.

Posted by Steve Beaumont at 21:33 No comments:

Just to pick up on the point I mentioned below on the performance of our central site running under VMWare.

As it stands at the moment with all our 3000 devices reporting into this one server we're seeing the following averages showing up in the performance charts over the last week:

So I was worried about it consuming all the resources of our virtual infrastructure and it turns out to be nowhere near as hungry as some of our other servers!
Posted by Steve Beaumont at 21:02 1 comment:

We're not an overly large organisation (around 3000 end user devices and about 180 servers) but we are quite spread out over the regional area with some 46 different sites.

Luckily we are fairly well connected with majority of our network links being 10Mb, 100Mb or 1Gb

Microsoft's recommendation of best practice is to use the smallest number of sites as possible so I decided in the end to go with one central site and just add Distribution Points or Branch DP's as needed during the implementation.

Another decision I had to make was whether to go with physical hardware or go against Microsoft's official advice and virtualise it.

Well I kind of went half way.

I decided to put the Central Site server on our VMware ESX 3 Infrastructure and locate the site database on our physical shared corporate SQL server.

I was sceptical when looking at the recommended specs if it would handle it but I have to say I'm really surprised at just how well it does perform.

Since doing this Microsoft have changed their policy on virtualisation support (which isn't surprising since Hyper-V has been released now) so as long as the problem can be replicated it's now a supported design.
Posted by Steve Beaumont at 20:36 No comments:

Dam I wish someone had given me more time to do this.

For all those of you starting to think about putting SCCM in or are about to and are like me a install, configure and plan as you go guy STOP!

System Center products are some of the few applications I wouldn't ever ever attempt again to install into a production environment without FULL planning and testing.

Before you even pick up the CD head over to SCCM Documentation Library and start pulling the workflows and other associated information down.

Top level items that MUST be considered/planned for if nothing else:
I could go on and I'll probably come back every now and then and revise, add or clarify bits but this too me is the very very very bare minimum amount of planning you should do just to get it into a test lab. If you tried putting SCCM into a live environment with only just this amount of planning then it's most likely to fail, or you're just very very lucky.
Last thing..... Get it installed in a test lab. Even if that means rigging 3+ virtual servers up on a machine do it. Just make sure it's an isolated environment so you can play with it do death and test out various solutions knowing your not going to take you're business down while you have fun.
Posted by Steve Beaumont at 20:05 1 comment:

Right, a bit more of a delay than I had hoped for but the dreadful thing called work has been getting in the way a lot recently.

Hi all and welcome.

I'm not entirely sure anymore how I'm going to structure this blog, so bear with me as a random scattering of thoughts starts to hit the virtual paper.

Quick thing to mention on the SCOM side of things. Parts I mention are probably covered in much more detail over on http://msopsmgr.blogspot.com/ by my resident SCOM wielding maniac, I mean professional ;) (Sorry Rob!)
Posted by Steve Beaumont at 19:57 No comments:

The Start of the Quest

Over the coming weeks, months, years (or however long it takes for me to give up) I'll be posting information relating to real life experiences with Microsoft's Systems Centre products.

The blog will mainly cover Microsoft Systems Centre Configuration Manager 2007 as this is where my expertise lays, but will have the odd smattering of Operations Manager, Mobile Device Manager and the other Systems Centre products from time to time.

Welcome, and I look forward to putting my often scattered thoughts down in pixels for the community to pick to shreds and from time to time find useful.

SB
Posted by Steve Beaumont at 14:05 No comments: