Since the beginning Operations Management Suite (OMS) and System Center Operations Manager (SCOM) have been able to work in conjunction, by that I mean you could have SCOM and it's agents reporting data up via the management group into OMS for analytics.

In fact, way back at the very start before it was OMS, that was the only method, but I digress.

We also have direct connected agents for those environments where SCOM isn't present, but OMS can still add great value giving the flexibility for customers who don't want/require the overhead of managing SCOM.

In the early days, if you were doing a Hybrid SCOM/OMS deployment, all was fine, just allow your designated SCOM Management Servers to access the OMS service on the Internet and watch the data flow.

However, as some of the new solutions started to emerge, the data volumes and frequencies meant that going via the SCOM Management Servers wasn't always practical, so certain solutions bypassed the management servers and attempted to upload their data directly to the OMS service.

Not all environments allow direct internet access so thankfully we got the ability to specify a proxy server for the agent, and recently we saw Microsoft introduce the concept of the OMS Log Analytics Forwarder.

So how do you know or decide when/where to use the OMS Forwarder, Proxy or just let the SCOM Management Group (MG) handle things?

Well, there is a nice table on the following TechNet documentation article that halfway down shows you the various solutions, whether they can upload via a SCOM MG or require direct upload (which can be done via proxy/forwarder).

Because I found the layout of the table a little "meh" and as I'm  much more of a visual person, I decided to try and map the data out in Visio, more for my quick reference than anything.

N.B. I've only focused on the Windows based agents here, Linux is basically direct agent based only. 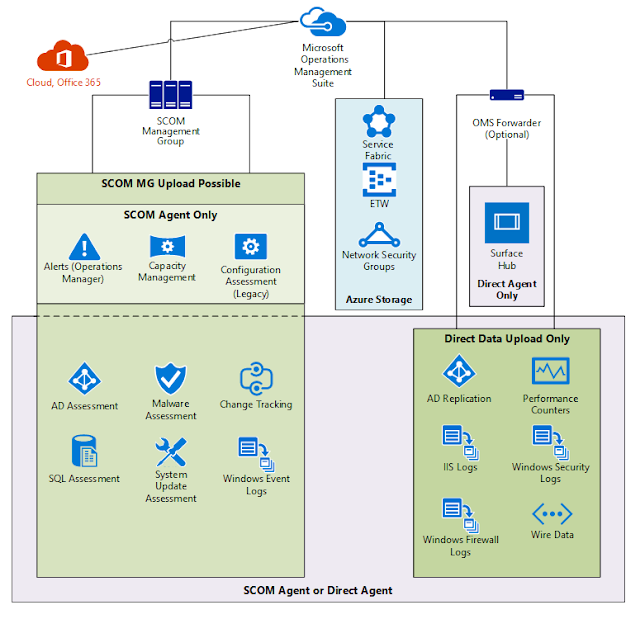 Basically, everything agent based bar Alerts, Capacity and Configuration Assessment can be done via direct OMS agent and therefore either direct to OMS, via proxy or via a forwarder.

A gateway is great for areas of your network which may not have internet connectivity (air gapped etc) or maybe you just want to streamline your connections to one device and out rather than multiple servers hitting your proxy server.

The other thing to note is the AD Replication and Wire Data solutions, along with IIS, Windows Security and Windows Firewall log collection don't go anywhere near a SCOM environment. So even if you are using your SCOM environment in a hybrid deployment with OMS, take note that you still need to handle the data upload for these solutions as you would if they were direct attached agents.

I've also included an embedded Excel version of the table that allows you to quickly filter the data to see what the requirements are.

What's coming for System Center in 2016?

While System Center Configuration Manager may have managed to squeeze out of the gates early, we already knew that the wider System Center suite (along with Windows Server as well) wouldn't be seeing a generally available release until 2016.

We still don't have a confirmed date as of yet, but with licensing details (here and here) having been announced and the previews being at the Technical Preview 4 (TP4) stage, if I was a betting man I would place it towards Q3 of 2016 for release.

Based on the TP4 release, what do we know at present?

The Technical Preview is available to download from here:
https://www.microsoft.com/en-us/evalcenter/evaluate-system-center-technical-preview


Well the core components that were in the 2012 R2 release are mainly still staying around to get an upgrade in the 2016 release.

If that's what's in, what if anything is not getting a refresh for 2016?

Well, App Controller has been deprecated, but this has been known for a while.
The on-premises functions are basically replaced with Windows Azure Pack and, let's be honest, not many people used it for deploying VM's into Azure

A little more surprising, well for me at least, is the removal of Service Reporting.
This was used in conjunction with Windows Azure Pack and gave the ability when used with VMM and SCOM to provide usage monitoring and reporting for billing purposes.

The suggestion from Microsoft is to utilise a third-party utilisation/billing system. So if you needed this functionality I'd suggest starting to look at things like Cloud Cruiser (which has an express "free" version for Windows Azure Pack only deployments). 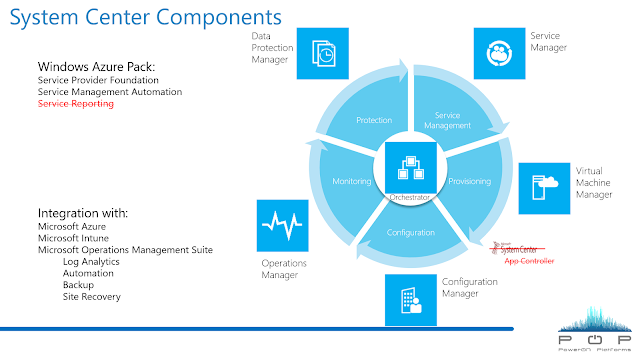 There are also some other side features/addons for System Center that have finally had the curtains drawn on them:

So there's no doom and gloom, a bit of fat trimming, but nothing scary.

On a positive note, what's new?

Well as expected, all components will be getting Windows Server 2016 support, both from an underlying OS to install on as well as a supported OS for management, monitoring and deploying (where applicable). Also SQL 2014 will be supported as a target for component installation.

Virtual Machine Manager (VMM) is getting the biggest amount of new features, which is quite understandable since it is driven by new features that come in the virtualisation and storage parts of Windows Server 2016.

Operations Manager (SCOM) so far in TP4 doesn't have a huge list, but what we are seeing are more and more cool features being lit up within Operations Manage Suite, of which SCOM can extend and integrate to.

Service Manager (SCSM) has a few new bits in TP4.


A high level summary of these features are:
SCSM also had some updates in TP3 that get carried across:
The latest #LyncUp call also announced that the Service Request area enumeration list will get moved into an unsealed management pack (sounds like a small change, but is long overdue!)

Orchestrator (SCORCH)… don't be expecting anything new for this component in the 2016 release, other than splash screens being changed to say 2016 and some updates to the Integration Packs to support the other System Center 2016 components.

We have however seen the "beta" release of the migration tools for Orchestrator that will allow runbooks to be migrated to Azure Automation.

I have a previous post on the migration tools:
http://www.systemcenter.ninja/2015/11/system-center-orchestrator-migration.html

The core of System Center remains the same in the 2016 release, with improvements, some new features and OS support but with a strong focus on Cloud based service integration with Azure and Operations Management Suite (which includes Automation, Backup and Site Recovery under that umbrella).

Please keep in mind, all of this is based on Technical Preview information (i.e. beta's) so is subject to change at any point.

It's never too late to influence the future of System Center. If you have an idea or a request, make sure you head over to the Uservoice sites and make it heard!