Previously the only way to test this feature was to purchase a Windows Phone Dev certificate which involved signing up as a developer at $99 and then purchasing a Symantec certificate at a further $299.

Now you can download this package from Microsoft which includes a pre-signed Company Portal, a script to set the relevant settings in ConfigMgr with a temporary token and also a couple of sample applications.

After downloading the MSI, run through the install which basically just extracts the files to a folder.  By default this is - C:\Program Files (x86)\Microsoft\Support Tool for Windows Intune Trial management of Windows Phone 8. 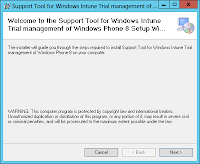 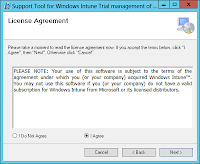 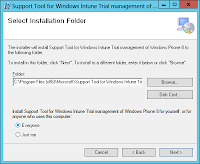 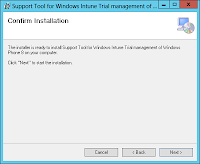 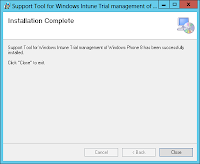 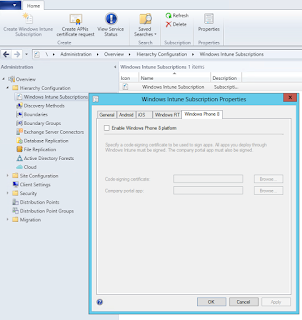 Copy the SSP.XAP from the package extraction directory to a UNC available path.
Create an Application within the Configuration Manager console and deploy this application to cloud DP (manage.microsoft.com) targeting cloud managed users 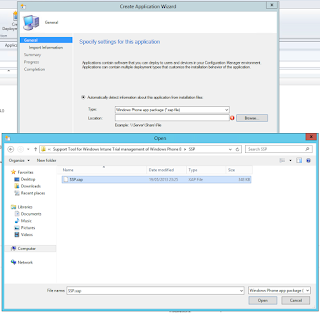 Watch out for the default name of the application and ensure you rename it to something a bit more friendly. 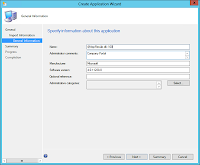 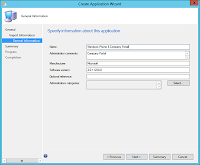 Run through the deploy wizard and select manage.microsoft.com as the distribution point 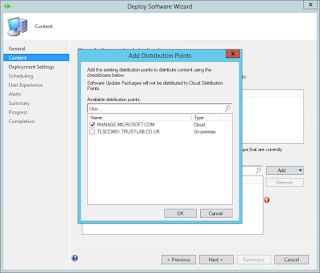 To enable management of WP8 devices open a command prompt and run the script ConfigureWP8Settings_Field.vbs (found in the package extraction directory) in query mode to get Company Portal name

This output will be used in the next step.

Run the script ConfigureWP8Settings_Field.vbs in save mode this time with the SSP name result.
This will populate the necessary certificate information to enable Windows Phone 8 device management 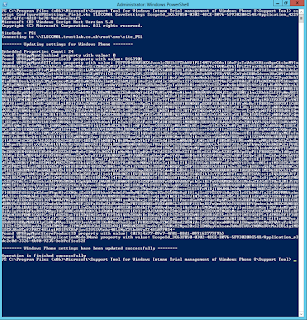 After completion of the steps above, verify that WP8 device management is enabled by checking the ConfigMgr console by going to the Intune subscription properties, WP8 tab.
WP8 should be enabled, certificate should be present, and company portal app should be populated with the name you gave the Company Portal app when you set it up. 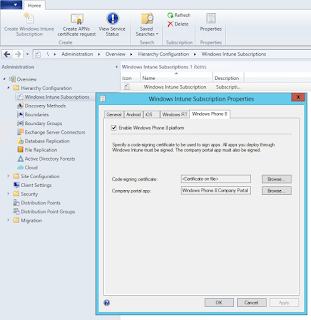 Assuming you have users sync'd up to the Intune/Azure directory and the UPN's match the accounts known by ConfigMgr, you should now be able to enrol users on their Windows Phone 8 devices.

Also included in this new package is some sample apps so that you can import something straight away for testing! 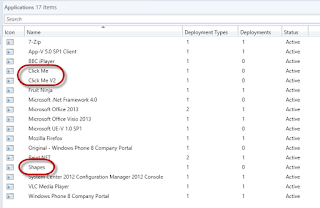 Posted by Steve Beaumont at 10:04 2 comments: Links to this post 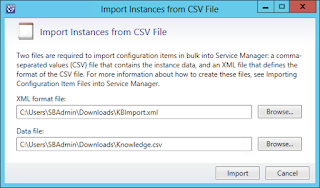 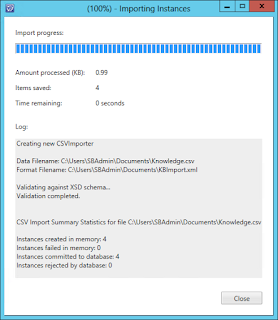 And that should be that, one set of exported and imported Knowledge Articles.
There is one limitation however...
In this current version only the Out-Of-Box lists are supported.  I'm working on the script to handle custom list values and will update the solution when it's automated.  Until then you will need to find the enumeration ID's from your target site and replace the source ID's in the CSV file with the corresponding ones.
I'd also like to thank Anton Gritsenko (aka FreemanRU) for pointing me in the right direction for this script.
Posted by Steve Beaumont at 20:44 3 comments: Links to this post

How can I export my knowledge base articles from Service Manager?

I've heard this question asked a few times now, especially when it comes to doing a migration rather than an upgrade from 2010 to 2012.

While it's fairly straight forward to output things like the Article ID, Title, Category etc using PowerShell, getting the Analyst and EndUser comments out is slightly more tricky due to them being stored as binary data within the database (They're RTF files basically).

While I may update this post to give a script that will export every last detail I'm pushed for time at the moment so I'll just post the most complicated part.

You can use the following PowerShell script to export the comments to individual rtf files for both Internal and Analyst comments.

I've only had a quick test of this within a 2012 environment which has the native Get-SCSMClass and Get-SCSMClassInstance cmdlets whereas 2010 doesn't.

However with the SCSM Cmdlets from CodePlex this script should be easily adaptable for the 2010 environment.

You could then use either PowerShell to import them back into a new environment, or use Anders CSV import method shown on his post here

Some useful details for working with Knowledge Articles in PowerShell: 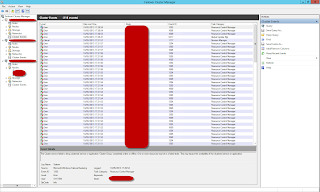 Posted by Steve Beaumont at 21:19 4 comments: Links to this post