Back at MMS2012 Microsoft announced they would be releasing two new authoring tools for Operations Manager (SCOM).

Well after a little delay, they've now been released.

The Visio Management Pack Designer can be found here:
http://www.microsoft.com/en-us/download/details.aspx?id=30170

The Visual Studio Authoring Extensions can be found here:
http://www.microsoft.com/en-us/download/details.aspx?id=30169

They're a little self explanatory, but basically the Visio MP Designer allows you to graphically design a management pack within Visio, using built in best practice methods to fairly quickly generate a management pack. 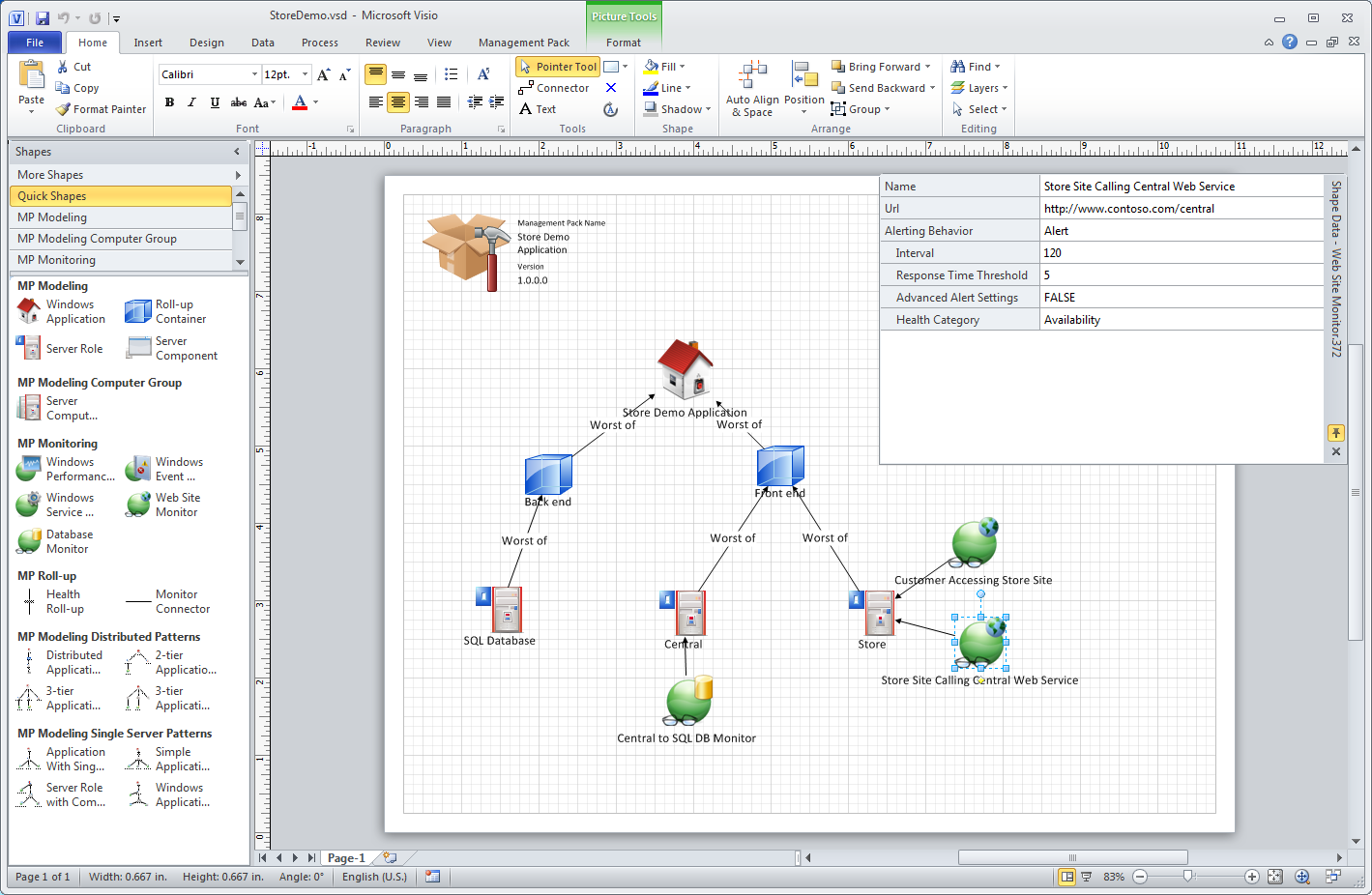 Likewise the Visual Studio extensions add class types and discovery rules etc into Visual Studio.
I'm certainly not a developer and it will be a while before I get chance to test this, but Michel Kamp has written an excellent blog post showing  prelease version here:
http://michelkamp.wordpress.com/2012/02/19/scom-author-meets-the-real-vs-authoring-extensions/ 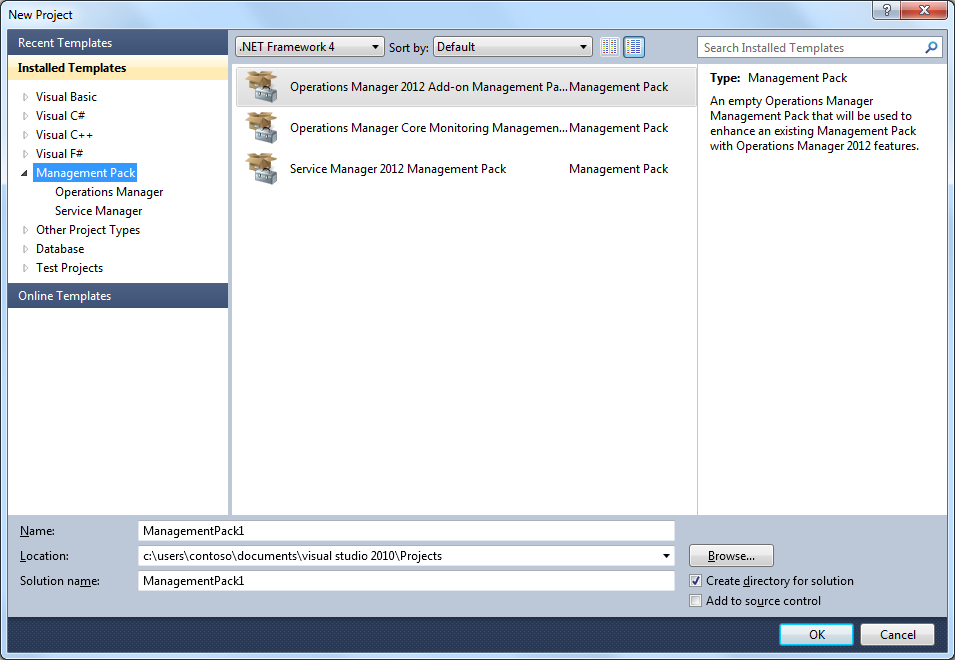 
*Images linked from the Microsoft TechNet Wiki's*
Posted by Steve Beaumont at 09:48 5 comments:

While at MMS2012 I had a conversation about packaging the System Center 2012 Service Manager Console as an App-V package and whether it had been tried or not.

At the time I couldn't think of any information I'd come across saying that it could or couldn't be done, but knowing that I had previously packaged the 2010 version successfully, I couldn't see why the 2012 version wouldn't be ok.

Well I've finally managed to squeeze some time in to try it and it seems to package and run fine.

After I had tried it, I thought it might be an idea to blog about it for others, but since there are so many steps, writing it up was a bit of a mammoth task.

So I recorded it and stuck it on YouTube!

Not only does this video show you the packaging of the console, which to be honest is a bit boring with nothing really special to see, but I also walk through some of the steps to then create an application in Configuration Manager and deploy it as an App-V package.

The steps I show also include deploying the dependencies for the Service Manager Console and targeting it at an Active Directory group of users rather than a collection of devices.

It also shows installing the application from the ConfigMgr self service portal.

Couple of bits of information shown in the video:
Each of those dependencies have their own requirements and dependencies ensuring the right components get installed depending on the OS and usage.

The App-V sequencing can definately be improved, but it works at the end of the day.

Finally...
This is a DEMO.  I have not tested this to great lengths so ensure you do your own testing before putting this into your live production environment.  There's no warranties from me and no official statement from Microsoft about this being supported either.
Posted by Steve Beaumont at 00:30 2 comments:

Microsoft showed off some of the new platform features (mainly developer focused not consumer) that Windows Phone 8 will be bringing later this year (October - November time).

I'm not going to go over all the new features like dual core etc, there's plenty of info already out there for you to find.

However I did want to mention briefly a couple of the new Enterprise level features that in my opinion mean you might want to reconsider using a Windows Phone within your business when WP8 arrives. 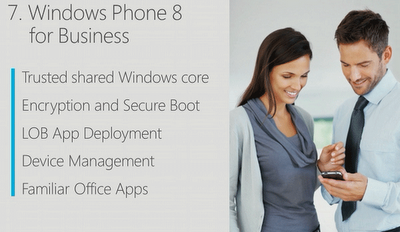 The big announcement from my view was the use of the shared kernel bringing BitLocker(ish) Encryption and UEFI Secure Boot to the Windows Phone platform.

It's apparently not full blown BitLocker but is derived from it and uses secure keys. 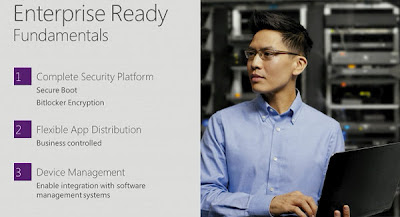 Having a secure phone platform like that "out of the box" is certainly a huge plus in my opinion.
Another couple of great features are around the custom app store and the ability to bypass the app store and presumably push apps to the phone via either or both Intune and Configuration Manager. 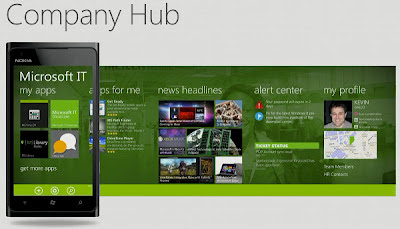 Speaking of System Centre 2012 Configuration Manager, it might be a safe bet to say that we may see a native configmgr client agent become available for Windows Phone 8, unless Microsoft decide that Intune becomes the preferred management platform.
I'd also like to know if that picture of the "Company Hub" is just a mock-up or not. If not then it would be interesting to know what System Centre integration we might see with the alert center and ticket status parts of it.
Posted by Steve Beaumont at 21:27 No comments:

My colleague spent some time in the TrustLab today installing VMware vCenter Protect Update Catalog.  This was previously a solution from Shavlik and provides update management of third party applications such as Adobe Reader, QuickTime, Sun Java etc directly from within System Center 2007/2012 Configuration Manager alongside the normal Microsoft patch updates. 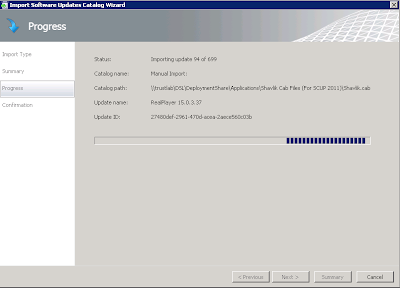 You can find Part 1 of his blog post on the installation here: http://ixrv.blogspot.co.uk/2012/06/configuring-scup-2011-shavlikvmware.html

Posted by Steve Beaumont at 17:08 No comments:

So Service Pack 1 CTP2 has just been released for download:
http://www.microsoft.com/en-us/download/details.aspx?id=30133

With the Technical Documentation here:

I don't know if it's an oversight or not, but there is currently no technical doc for ConfigMgr....

Server App-V
Posted by Steve Beaumont at 17:03 No comments:

I posted a while back about two new exams that Microsoft were introducing:


Well these exams have now gone live and with that it means those that took them in the Beta format at MMS 2012 are starting to get their results.

I hadn't recieved an e-mail so I thought I would check manually and this is the result: 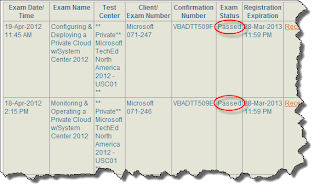 So I've passed the 70-247 exam, which I thought was the harder of the two due to the ammount of SCVMM questions that were in it and I'm still learning that product.

That's one step closer to getting certified as MCSE: Private Cloud.
Posted by Steve Beaumont at 09:37 2 comments:

MBAM 2.0 plus other MDOP updates

The Redmond machine really is in high gear at the moment as lots of other products and solutions start to recieve tweaks and new features, mainly in preperation for Windows 8 and Server 2012.

One set of tools getting some love is the Microsoft Desktop Optimisation Pack (MDOP).

Microsoft had already previously announced that MDOP was seeing a new component being added called UE-V which along with App-V makes MDOP a desirable solution to have in any environment looking to have a fantastic dynamic desktop, but today MS announced MBAM will also be getting some new features.

The Microsoft Bitlocker Administration and Monitoring (MBAM) will be updated to include new options such as:
Microsoft have also promised another update to UE-V very soon but so far during my tests I've seen no issues other than some poor documentation around its setup/configuration (hint... watch out for Offline Files or rather the lack of...)

App-V 5 is in Beta with new features such as shared cache which is amazing for VDI infrastructure.

DaRT is also getting an update, again mainly to support Windows 8.

I wish I was across at TechEd North America right now as there is some nice information starting to come out around some of the new features that Service Pack 1 for System Center 2012 will be bringing.

From the information I'm seeing on other blogs and the twitter feeds it looks like we'll be seeing an updated CTP (Community Technical Preview) of SP1 arriving within the week with some of the following new features and changes for Configuration Manager:

There has also been talk about some new User Profile and Data Management features such as Roaming User Profiles and Folder Redirection support, but I don't have enough information about what this means to explain any further but it could be interesting.

So I can't wait for SP1 now!  Linux/Mac OSX support is huge and a long awaited feature but the announcement of being able to add a CAS at a later date is also greatly welcomed as it makes my life so much more simplified when designing ConfigMgr implementations for customers.


There's also going to be an Update 1 for MDT 2012 soon which will bring the expected Windows 8 support, but it's also been announced it will have Orchestrator integration allowing running of runbooks during an OSD deployment.  How cool will that be!!
Posted by Steve Beaumont at 07:11 No comments: