I've been holding off posting the next part in my series of posts on Windows Intune and the new integration capabilities found in System Center 2012 SP1 Configuration Manager, specifically the Windows Phone 8 management setup due to a small problem I encountered.

While I was at a customer running an Intune PoC, we deployed the Company App to a Windows Phone 8 device and while it installed we were created with the app being called C:\Data\Programs\{o... 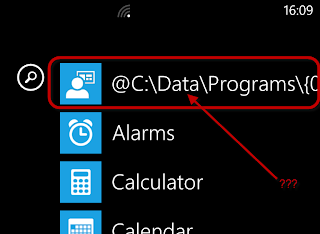 I tried re-signing, re-uploading and other things, all to no avail.

I finally caved in and rang Intune Support.

After stepping through all the procedures again with the same results, the Intune support team went away to investigate further with the product team.

They came back to me asking what language my phone was running (English[UK]) and if I could try changing it to English[US] which I did.

This immediately changed the name of the app to it's correct name of Company Portal.

I've been discussing this on the TechNet Forums as others were having a similar issue:
http://social.technet.microsoft.com/Forums/en-US/windowsintuneprod/thread/b83bf0da-3daf-4296-9ca2-31ba5966481a/

There is a reply on there from Cathy Moya explaining that they're aware and looking into the issue. 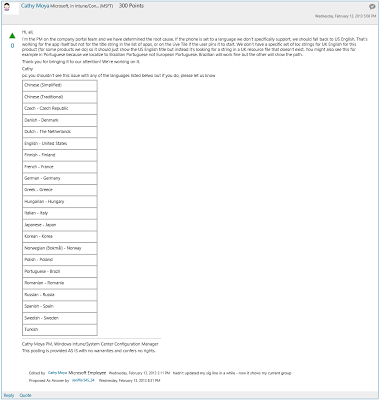 It's nice to see Microsoft take such a quick action (Only a couple of days after logging the issue) to acknowledge there's a problem and to start looking to resolve it.
I would also like to say a special thanks to Jon Lynn who picked up this call and is constantly trawling the forums to give people advice and help.
If for some reason you really can't wait for MS to release an updated/fixed Company Portal app, I do have a workaround hack however.
Just please note that this is not supported, disables all Multi-Language capabilities for the title display of the app and could have other impacts that I don't know about.  So on your own head be it.

Modifying the Self Service Company Portal to display a friendly name

The following steps are to prevent the Company Portal from being installed and displaying a name of @C:\Data\Programs\{0……

This is unsupported by myself and probably Microsoft, do your own testing and accept the risks or don't use. 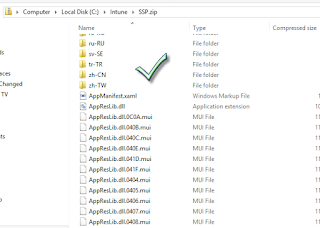 Good find. I was wondering why I was seeing the weird name on a Physical Nokia Lumia but not on the Emulator.