This was even more annoying than most failed software installs as I've not had a problem with installing SCORCH in the past, but this time it failed almost straight away. 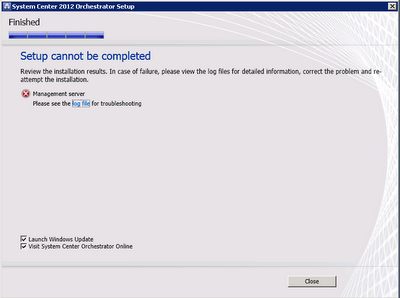 Each time I went through the install, changing various options as I went, even rebuilding the OS from scratch in case a windows update was messing it about, I hit the same error.

It took me a while to cotton on as to what was causing this, but just to save someone else the time, watch out for complex passwords, you can't have a password that contains a " in it otherwise it will cause this problem as it passes the password along to the silent install string for the MSI which interprets it as the begining of a quote wrapper in the command line.

So if I add the " into the command line, this is what the SCO ManagementServiceMSI was trying to run:

You Sir, are a lifesaver!

I've been banging my head against a wall all day with this.