** Before reading this please note this is UNSUPPORTED, and should NOT be used in production environments **

When setting up my test Service Manager environment I did a clean install of the SP1 release and then upgraded to CU1 shortly after.  When setting up I didn't have a requirement to install the Self Service Portal as we were still yet to deploy it in production.

Microsoft best practice states that the Portal should be installed on a separate server for performance considerations, but when testing it's sometimes easier just to stick it on the same server to save on resources.

However, if you've already updated to SP1 CU1 then you'll be greeted with this message when trying to run setup.... 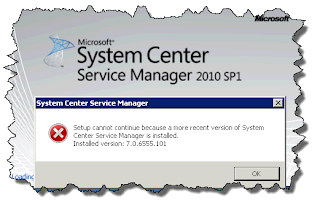 I can't find it right now, but there is an article out there somewhere on doing basically an uninstall, then a re-install but connecting back to the databases by restoring the encryption keys which allows you to add the portal, but that seems a bit too long winded for a test environment.

(Again, remember I have no idea on long term impacts so do this at your own risk)

I tracked down the Registry key that gets queried by setup for the version installed:
HKEY_CLASSES_ROOT\Installer\Products\7C8A391A7EBCB3F488F7B630EE342A80\Patches 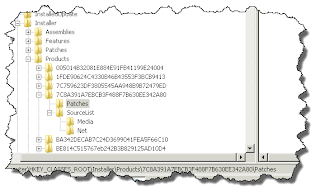 If you delete this registry key (Export a copy first!!!), and then re-run setup, it will proceed.

After install, re-import the reg key and you're good to go! 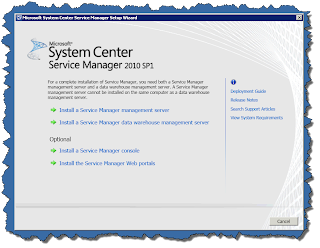 This "shouldn't" have any impact on a SP1 CU1 install as CU1 only updates the Service Manager & Data Warehouse components, not the Portal components, so I would NOT recommend trying it on the pre SP1 cumulative updates, or any future cumulative updates.
Again, this is unsupported and backup, backup, backup, test, test, test if you're going to try it.
Posted by Steve Beaumont at 17:36